The death of Captain Rowland Siddons Smith was identified when examining photographs of the grave of the single casualty commemorated in Hawaii. Although holding military rank, he is not commemorated by the Commonwealth War Graves Commission because he was an employee of the Colonial Office and his death was not due to enemy action.

Rowland Siddons Smith was born on 11 November 1867 in Bareilly, Rohilkhand (now in Uttar Pradesh), India, the only son and eldest of the seven children of Rowland and Mary Smith.[1] His father was an officer of the Bengal Staff Corps, who had served with 59th Regiment of Bengal Native Infantry in the East India Company from 1852, through the Indian mutiny and, later, during the 2nd Anglo-Afghan War.[2] About 1873, Major Rowland Smith and his family returned moved to England—first to Yorkshire, where a daughter was born, and later to the Isle of Wight, where two more daughters were added. He returned to India just prior to the Second Anglo-Afghan War, during which he commanded 8th Regiment of Bengal Native Infantry, and after which he was invalided to England. His final daughter was born in 1881 on the Isle of Wight before the family moved to Red Hall at Bracebridge Heath near Lincoln, where Colonel Rowland Smith died suddenly on 24 July 1893. His mother subsequently settled in Caversham, Oxfordshire. END_OF_DOCUMENT_TOKEN_TO_BE_REPLACED 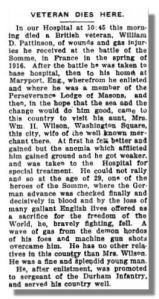 The death of Sergeant William Pattinson in Hagerstown, Maryland was brought to our attention by Jill Craig of Western Maryland Regional Library. The notification of his death, published in the Hagerstown Daily Mail, was found during research for a project about Western Maryland during the war. He is not commemorated by the Commonwealth War Graves Commission—a case will be made for his death to be recognised as attributable to his war service.

William Pattinson was born on 21 January 1889, in the village of Crosscanonby in Cumberland, the eldest son and eldest of the five children of James and Margaret Ann Pattinson.[1] His mother worked as a milliner in his father’s drapery business. END_OF_DOCUMENT_TOKEN_TO_BE_REPLACED

This is part of a series of essays about the First World War casualties commemorated by the Commonwealth War Graves Commission in Maryland.

Late on 30 October 1917 a fire broke out on Baltimore & Ohio Railroad Pier 9 at Locust Point in Baltimore, Maryland. The fire destroyed the pier, the old immigration building on it, and set fire to the SS Kerry Range, a British, armed, merchant ship that was moored alongside. Four men died and the damage caused was considerable—freight worth over $5,000,000 was destroyed and the Kerry Range was wrecked. The fire occurred at the height of anti-German hysteria and speculation about incendiaries placed by German agents led to the arrest of a number of ‘alien enemies’. An investigation concluded, however, that the blaze was caused by an electrical fire in one of the buildings on Pier 9, which ignited piles of oakum.[1] END_OF_DOCUMENT_TOKEN_TO_BE_REPLACED

'Sacrifice' by Nick Metcalfe is licenced under a Creative Commons Attribution-NonCommercial-ShareAlike 4.0 International License.
Imagery NOT marked ‘Author’s Collection’ may be subject to another licence arrangement and/or may not be available for reuse.
Loading Comments...